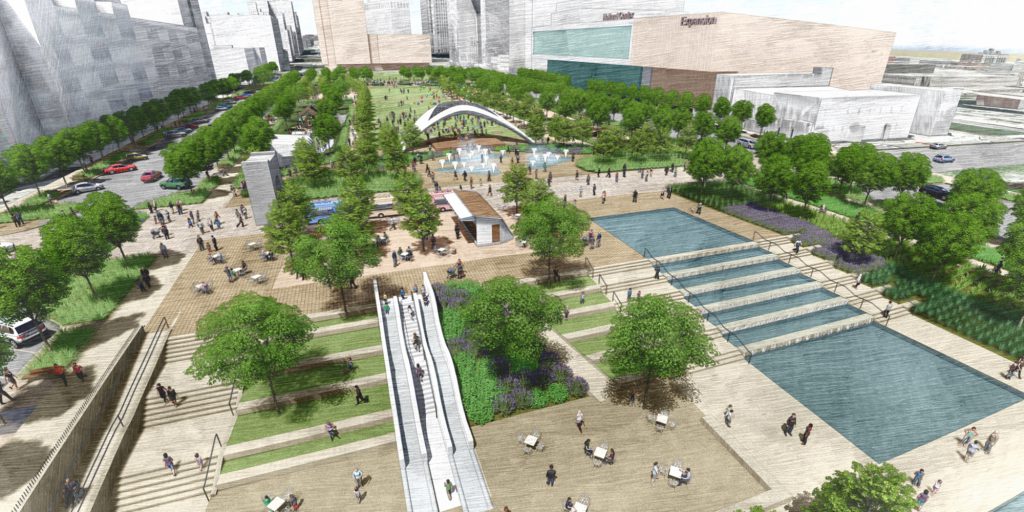 Today City and project leaders took the first steps to make the vision for downtown Omaha’s revitalized riverfront into a reality. Ground was officially broken at Gene Leahy Mall, marking the start of an approximately four-year construction process – currently scheduled for overall completion in late 2023.

The Metropolitan Entertainment & Convention Authority (MECA) will oversee the construction, maintenance and activation of the renovated riverfront, announcing Katie Bassett as MECA’s new Vice President of Parks. Bassett rejoined the MECA team this month, where she’d previously served as Stadium Manager at TD Ameritrade Park from 2012 to 2016. She will be tasked with supervising the project, in a position newly created by MECA for this nearly $300 million endeavor. “We believe we have the best people for the job in place,” Roger Dixon, MECA President and CEO, said, “We’re ready to get started.” The Gene Leahy Mall will be the first park to undergo transformation – closing in part beginning on Wednesday, March 6th. It will also be the first phase to reopen in 2021.

“I believe this will be one of the most significant projects in Omaha’s history,” said Mayor Jean Stothert. “It reflects the generosity of donors, the beauty of the riverfront, and our faith in the future. The parks will be a destination for our citizens and visitors. We will attract new talent, new convention business and new events.”

Members of the riverfront groundbreaking shovel team include:

MECA has entered into agreements with OJB and HDR for their continued efforts to conceptualize and design the riverfront transformation. Kiewit has been contracted to act as construction manager. Fences will start to go up around Gene Leahy Mall on Wednesday, March 6 with traffic lane closures beginning around morning rush hour. Weather permitting, tree removal will immediately follow. Park construction will have the following
impact on the area.

There will be an immediate loss of sidewalks and parking on the north and south sides of Gene Leahy Mall. Meters on Douglas Street from 10th to 14th Streets will be removed, along with meters between 13th and 14th on Farnam Street. Sidewalks will also be closed at these locations, and intermittently closed in other areas around the park as construction requires.

– The parking lane and one driving lane on Douglas (10th to 14th) will be closed during construction; the other three lanes will remain open.

– The slides will not be open during construction.

– Food trucks on Thursdays will relocate from the Mall to Dodge Street, between 14th and 15th Streets in the spring. They will also park on 14th Street from Capitol to Dodge.

– The tree canopy in Gene Leahy Mall will be replaced tree for tree, with trees already standing 15 to 20 feet tall at time of planting. The Public Art Commission is assisting with the relocation of artwork currently displayed at the Mall to new Omaha park locations.

By May, demolition and grading will be underway. The Gene Leahy Mall is the first of three parks to undergo renovation, including Heartland of America Park and the Lewis & Clark Landing. The last two parks will not close until 2020. An updated fly through and renderings of Gene Leahy Mall can be found in the following drop box link.

Construction and project updates (including upcoming closures) will be regularly communicated online at www.riverfrontrevitalization.com and on the Mayor’s website. Questions may be referred to the Mayor’s Hotline at hotline@cityofomaha.org or by contacting MECA.